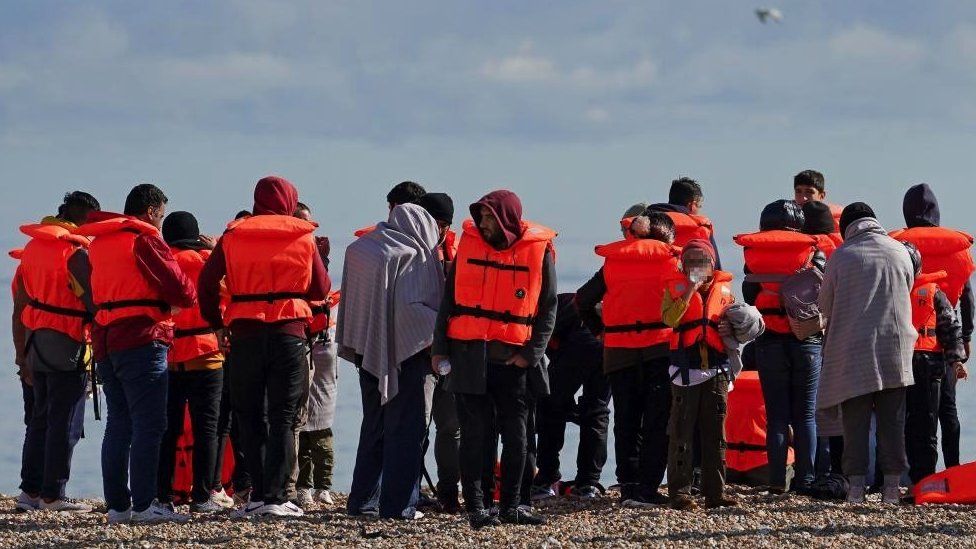 It’s a slow Sunday in Kukës, Northern Albania and I am trying to convince 40-year-old Bedri in Liverpool House, a local bar, that coming to England might not be such a good idea. “If I had €3,000, I would buy a boat tomorrow,” says the father-of-two. If you don’t drown in the English Channel, you will get deported, I tell him. He smiles. Nothing I say he believes: the Brits who no longer want him; the country that is in decline; the politicians trying desperately to shut its door. Bedri is not alone in wanting to leave. Britain is the obvious escape: locals say four out of five of the town’s residents are related to someone who works or has worked in the UK. Does anyone want to stay? The patrons of Liverpool House shake their heads. I speak to a teacher, a policeman, a 16-year-old boy. All are planning to come to Britain, legally or illegally — by boat, by lorry, by plane. As Britain declines, the myth of its grandeur, its hope, lives on in the far-flung imagination of these men.

I ask if they care about what happens to Kukës, but the question is redundant. It is basic economics — people will move if they are paid more. A decade of unprecedented migration into this country is proof of that. Loyalty to land and community has lost. Still, I try to resurrect that dead idea: is there not more dignity in being a professional in Albania than a labourer in the UK? “I did dignity for 20 years,” says a police officer, smoking behind us, “and now I have nothing.” To prove his point, he takes me out on patrol. “Look,” he says pointing to the streets, “all old people, no future.” Corruption, neglect: this is the story of Kukës he gives me. A place where after the fall of communism, the end of history never arrived. The last major construction work that was completed on time? A nuclear bunker on the orders of the country’s mad dictator Enver Hoxha, finished just as the Cold War was winding down.

Out of town, we head into what has become known as “the exodus zone”: the villages nestled in the foothills of an Albanian mountain range nicknamed the Accursed Mountains, from where most of its men have left to work undocumented in England. Here, the journey across the Channel starts to make sense. In one abandoned hamlet, 72-year-old Zehrito emerges from her newly refurbished house. Three years ago, her son landed in a dinghy on the shores of Kent. He walked into town, jumped on the train and spent the next three years building luxury apartments in London. The money he sent home paid for his mother’s heart surgery. “If it weren’t for him,” she says, “I’d be dead.”

Soon all this may end. Everyone I speak to in Albania, from the Crown Prince to the hotel receptionist, is trying to imagine a future in which half the population does not flee. They know the British Government is trying to close the door. News of Conservative ministers who want to bar Albanians from seeking asylum and fast-track deportation schemes make the evening news. More who leave illegally are being sent home. And for a country where 31% of GDP relies upon money sent back home by emigrants, this is not good news. The economics of the great diaspora are starting to be tested. The population is ageing. In some towns, patients must cross the border to Kosovo or Greece for healthcare. Schools are emptying out. Beyond the capital, large swathes of civil society are virtually non-existent because there is no one to do the jobs required. The World Bank predicts that soon a third of the country may be below the poverty line. This is despite the country’s consistent rise in GDP in the last decade — one largely driven by foreign investment. For those left behind, the age of exodus is starting to unravel.

On Albania’s Day of Independence in late November, the grandson of its last King, Crown Prince Leka, walks me through the capital. The Crown Prince recently broke his ceremonial silence to appear alongside Piers Morgan and Reform UK leader, Richard Tice, and defend his countrymen from Suella Braverman’s talk of an Albanian “invasion” in Kent. When I meet him, the prince is full of hope for the country. Guiding me through the open boulevards of Tirana, he talks not only about the country’s past but the promise of its future. We walk past the national bank being rebuilt, a place that will soon coordinate the growing investment in the country’s tourism sector. Despite the pandemic, visitors to the country generated more income than ever. Cranes tower over half-built apartment buildings.

“Albania has always been on the edge of Great Empires and this is what makes it unique,” he tells me as we near his grandfather King Zog’s old palace. It was the last European colony of the Ottoman Empire, the last under the most severe form of communism. In Albania, history has often happened too late. But now it is at the vanguard of trying to solve the global problem of international exodus. It has become the testing ground for different policies aimed at deterring people from leaving the country. British investments to prop up the country’s local economies and stop the flight have seen £6m poured into the region of Kukës. The money will be used to build infrastructure and  kickstart the region’s hopes of making the Albanian Alps a tourist destination. For a country weary of politicians swindling public money, there is scepticism. But the model of investment makes sense, and the £6 million is a trifle compared to the estimated £150m it would cost to find and deport those who have crossed the channel illegally this year alone.

For Lavdrim Krashi, MP for the Dibra region just south of Kukës, this is only half the problem. There is also a need to lure back the people who left the country. “The diaspora is our biggest asset,” he tells me on the night of Albania’s Independence Day. The former senior local government manager from London, a poppy pin in his lapel, is an example of his own vision in action: to see those who have lived and worked abroad bring back their experiences and regenerate Albania. Others have done the same. One of his constituents arrived illegally in the UK and ended up serving the Queen lunch. Now he has returned to Tirana and runs a successful chain of restaurants. Lavdrim also makes it clear that he wants the values of these countries brought home too — particularly those of Britain.

When I hear this, I tell Lavdrim the story of Xhevahir, the schoolteacher I met in Kukës. Before the pandemic his visa application for the UK was rejected. Now between his job as a teacher and running an English-language school, he spends his time trying to convince his students not to leave. I had asked him in Liverpool House what he said to them, and he laughed at me: “It’s hard to know what to say when you are planning to leave too.”

I ask Lavdrim if the hope of the returning diaspora, “British values”, and targeted investment in Albania’s local economies can really be enough to stop the lure of higher wages. He found it difficult to answer. Much of this wishful thinking is dependent on factors beyond the country’s control. To end the exodus, whether progressive thought likes it or not, requires countries such as Germany, England and France to stop encouraging the country’s “brain drain” with visa schemes. In addition, it requires a commitment by both the Albanian government and private enterprise to invest in something whose returns may not be immediate: the local economies of the nation-state. To rebuild a community, and indeed a country, hollowed out by a decade of hyper-globalisation.

Curiously, to explain their frustration, the men in Kukës turned to those values that Lavdrim seemed to want to bring home. A sense of respect and integrity they saw in Britain, but also its monarchy and history. They could not understand why other nationalities — Afghans and Iraqis — had apparently escaped the Home Secretary’s ire. A visa should be about love for the Queen and respect for the country, said one.

After I spoke with Lavdrim, I went to see the statue of Skanderbeg, one of the heroes of Liverpool House (along with Steven Gerrard) who, in Albanian historical legend, saved Europe from the scourge of the advancing Ottomans in the 15th century. On the night of the Independence celebrations, a stage was being prepared for a concert by London-born English-Albanian popstar Dua Lipa. The day before, she had been given citizenship. There were plenty of young people on their way to the concert. They reminded me of the teenagers I had seen at Liverpool House, watching on TikTok the lives of their luckier contemporaries in England.

Beneath the husks of Tirana’s new construction, they walked past the statue of Skanderberg and towards the lights of the concert. I remembered something Bedri had told me in Liverpool House. “Deep down, no one wants to leave their home country.” (Unherd)