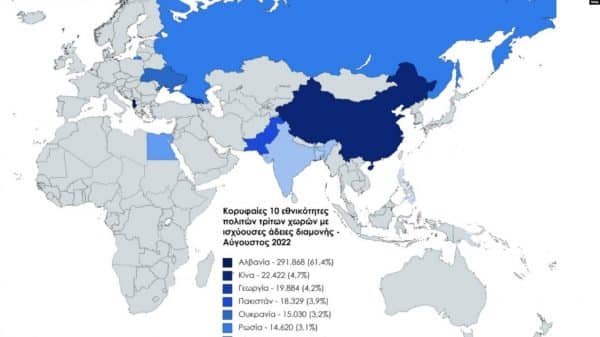 Many legal Albanian citizens with a valid residence permit are leaving Greece for wealthier countries, according to data released in August by the Hellenic Ministry for Migration and Asylum.

The decrease in the number of Albanian immigrants in Greece is related not only to the stricter procedures for issuing residence permits and obtaining Greek citizenship but also to a dynamic movement of Albanian workers and their families to other European countries with better conditions and prospects.

They choose other European countries

A large number of Albanians who lived in Greece have emigrated to Northern Europe and Great Britain after facing difficulties in Greece in terms of employment and rising prices.

The 2022 number issued by the Ministry includes the 13,329 Albanian citizens who are identified by the special designation “homogeneous” on their ID cards. This officially identifies them as individuals of Greek minority from Albania.

In total, there could potentially be more than half a million Albanian-born individuals in Greece who along with their children have been granted Greek citizenship over the years.

Italy and Greece still host the largest number of Albanians living abroad, with the number increasing in Italy while it decreases in Greece due to economic hardship.

Albanian immigrants integrate better in Greece than other foreigners

Albanians have a long history of Hellenization, assimilation, and integration in Greece. Despite social and political problems experienced by the wave of immigration in the 1980s and 1990s, Albanians have integrated better in Greece than have other foreigners.

A portion of Albanian newcomers change their Albanian name to Greek while others also convert to Orthodoxy. Even before emigration, some individuals from southern Albania adopted a Greek identity, including name changes, adherence to the Orthodox faith, and other assimilation tactics in order to avoid prejudice. In this way, they hoped to get valid visas and eventual naturalization in Greece. (Greek Reporter)