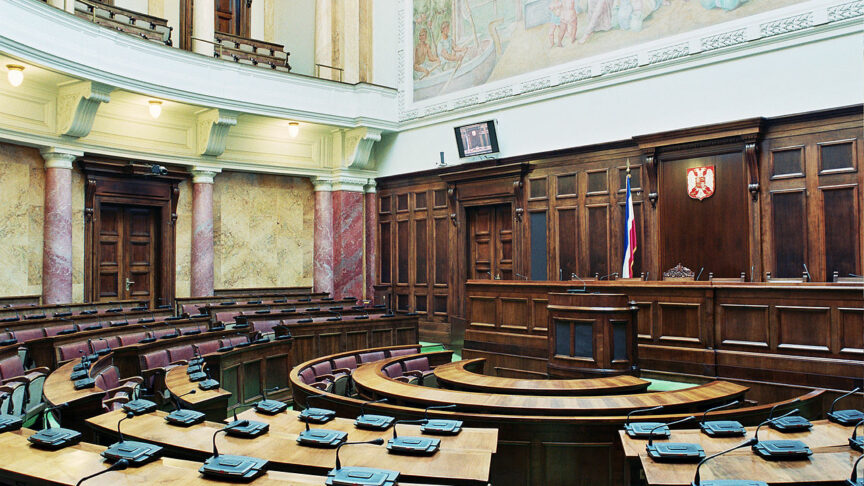 In September, Serbia’s parliament gathered for an urgent special session of discussions on the issue of Kosovo. President Aleksandar Vucic, however, saw this as an opportunity to pontificate for an hour on topics such as the economy, investments, and which roads and railways have been constructed. Admittedly, he then spent two days engaging opposition MPs on the current handling of relations with Kosovo and the path forward – though, of course, he could not resist countering each of our policy critiques with ad hominem attacks and a heavy dose of ‘whataboutery’.

Nevertheless, some sensible – albeit broad – policy positions emerged over the course of the session. In response to cries from far-right MPs to “retake Kosovo”, Vucic asserted that it is better to engage in talks and diplomacy for a hundred years than in conflict for a day – also referring to the need for compromise and to acknowledge the things ethnic Albanian Kosovars will never accept. Faced with pro-European arguments, however, he soon defaulted to his standard position: Serbia will never directly or implicitly recognise the independence of Kosovo, nor will it turn its back on Russia and China. In the end, the marathon session amounted to little more than sound and fury in service of the status quo.

This is unfortunate; Serbia’s leaders could and should have used this opportunity to reframe their negotiating position and start laying the foundations for a workable long-term solution on Kosovo’s status. Political and diplomatic chatter in the European Union and Serbia suggests that one such feasible – if still hypothetical – solution could be a ‘two-Germanys’ type model. That is, Serbia would recognise Kosovo’s de-facto independence, but it would not formally, de-jure, sign or ratify such independence. But this model would still require the Serbian parliament to ratify a normalisation agreement. And, for that to be possible, Kosovo’s leaders – as well as European and US facilitators – will need to help lay the groundwork.

Firstly, Kosovo’s prime minister Albin Kurti should permit the establishment of the Association of Serbian Municipalities (ASM), a semi-autonomous community of ethnic Serbs that would operate under Kosovo law but with competencies yet to be determined. Establishing the ASM would (on paper at least) be the final step in the implementation of the 2013 Brussels Agreement – which set out the principles for the normalisation of relations between the two parties. This would serve as an important trust-building measure, with advantages for all sides.

For the European Union, it would reassert the bloc’s integrity and influence as a global actor, especially in the Western Balkans region – where the United States has repeatedly had to intervene. The parties signed the Brussels Agreement under the auspices of the EU, and the longer it takes to be implemented, the less faith there will be in the implementation of future EU-brokered agreements. The same applies to Kosovo: the delays have fuelled concerns in Serbia about the degree to which Kosovo’s leaders will respect future agreements that aim to guarantee the rights of Kosovo’s ethnic Serb community. So, the establishment of the ASM could provide both Serbian leaders and the Serbian community in Kosovo with reassurance in this regard. It would then be possible for Belgrade to consider a second, more detailed ‘Brussels agreement’, leading to the full normalisation of relations. Pristina would benefit too, given that implementation would lead to a gradual reduction of tensions and better integration of the Serbian minority and Albanian majority in Kosovo.

Secondly, Kurti should re-evaluate his demand for formal recognition, especially in this phase of the dialogue. Until the Brussels agreement is fully implemented, any sort of recognition (even implicit) would meet with resistance from across the Serbian political spectrum. The Serbian public and ethnic Serbs in Kosovo have absorbed endless rhetoric that Kosovo will never be independent. As a result, a majority of Serbia’s citizens would prefer never to join the EU if that meant formal recognition for Kosovo. So, even with the full implementation of the Brussels agreement, no Serbian politician capable of commanding a parliamentary majority would risk squandering their political capital by formally recognising Kosovo’s independence.

A ‘two-Germanys’ type deal is more realistic. This kind of agreement would probably still involve some symbolic restrictions, such as different titles for the ambassadors between the two countries – for example, ‘permanent representative’ as in the case of East and West Germany. Importantly, however, it would enable Serbia to lift its blockade and campaigns against Kosovo joining international organisations, including the United Nations, and stop blocking Kosovo’s EU membership. Given the current geopolitical situation, veto-wielding Security Council members Russia and China would be unlikely to support Kosovo’s accession to the UN. Nonetheless, the withdrawal of Serbia’s objection would represent a significant step forward.

In addition, Serbian leaders would need to conduct an effective communications campaign to prepare the public for Serbia treating Kosovo as if it were independent. This could also help counter the inevitable noisy resistance from conservative, nationalist, and far-right parties – whose discourse currently dominates on almost all media platforms. But the government has a powerful influence over most of those platforms, meaning – with the necessary political will – it could change this narrative.

Beyond the establishment of the ASM, Serbia would expect some sort of compensation for agreeing to fully normalise relations with Kosovo. This used to be the promise of quick EU accession – but the EU’s pull has greatly diminished over the years. Public support for EU membership has now fallen to less than 50 per cent, which has corresponded with a marked reduction in pro-EU discourse from Serbia’s politicians. Moreover, Serbia has experienced backsliding in democratic governance, media freedoms, and rule of law – so quick accession is far from certain.

The EU and the US will need to offer Serbia an incentive package. This would likely comprise fast-tracked EU membership, assistance with the security of energy supplies, and some sort of financial incentive. Discussions on the details of such a package remain a long way off. But international facilitators will need to keep this eventuality in mind as they move forward with the dialogue process.