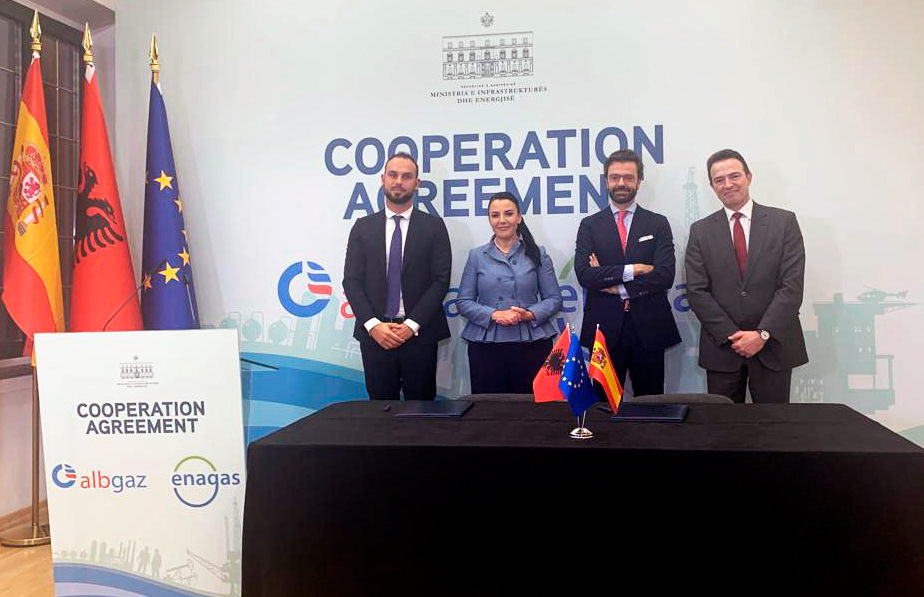 The CEO of Enagás, Arturo Gonzalo, and his counterpart at AlbGaz –the operator of the natural gas transmission system in Albania– Arber Avrami, have signed a strategic cooperation agreement in Tirana (Albania), in which, among other aspects, the Spanish operator has stated its interest in analysing the possible acquisition of a stake in the Albanian company and in studying joint projects, within the Albanian and European regulatory framework, and in accordance with the guidelines of the Albanian government.

The present agreement, whose signing took place at a meeting chaired by the country’s Deputy Prime Minister and Minister for Infrastructure and Energy, Belinda Balluku, and the Ambassador of Spain to Albania, Álvaro Renedo, includes an assessment of participation in natural gas and renewable gas projects currently being carried out in Albania and in the Mediterranean region.

During the event, Arturo Gonzalo explained that “this agreement responds to the long-term commitment that Enagás has in Europe and, in particular, in the Mediterranean region, in line with its strategy of alliances with operators to further the security of supply”. In this regard, he pointed out that “Enagás has already a relationship with AlbGaz, thanks to the company’s 16% stake in the Trans Adriatic Pipeline (TAP, which links Turkey with Italy through Greece and Albania), as well as in its eventual expansion”.

In turn, Arber Avrami, pointed out that “this agreement marks a new dimension in which our vision of strategic natural gas projects with regional gravity attracts the cooperation and interest of the world's energy leaders. In this context, the cooperation agreement we achieved with Enagás reflects such willingness, as well as the interest of our valuable partners to examine new growth horizons within the scope of mutual projects, while remaining dedicated to our common goals for energy security, diversification of supply and sustainable development”.

This agreement was reached as a development of the draft agreement signed last June by the two leaders of the Spanish and Albanian operators, Enagás and AlbGaz, in Madrid. The Prime Minister of Albania, Edi Rama, the Spanish Vicepresident and Minister for Ecological Transition and Demographic Challenge, Teresa Ribera, and the Albanian Deputy Prime Minister and Minister of Infrastructure and Energy, chaired this event over.

On that occasion, the two operators signed a Memorandum of Understanding (MoU) to collaborate on the development of gas infrastructure in Albania in order to lay the foundations with which to contribute to the security of the country’s energy supply and the decarbonisation of its economy, replacing polluting fuels and also promoting renewable gases.